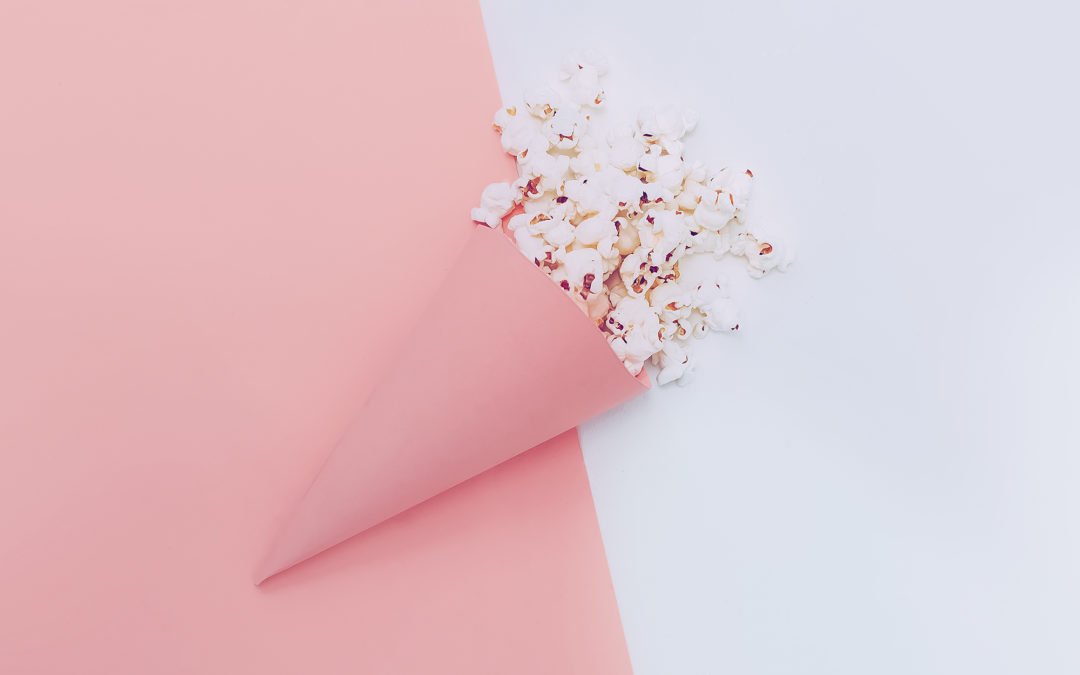 Recently I posted a blog about my lifelong passion for learning and all the ways I love to lean new things. It really is how I spend the majority of my time.

But on lazy, cold and rainy Sundays like this one – I freaking LOVE watching a good old Netflix series. It’s truly one of my favourite things to do when I’m in the mood to turn off my mind and relax my body. My love affair with a good TV series trumps any movie – I don’t know why. I just get so attached to the characters and love the development of the story. Honestly, a good show makes me so happy!

Early in my relationship with Anthony we used to get excited to watch series together. Breaking Bad, The Killing and Sons of Anarchy – all the ones that always make everyone’s ‘must watch’ lists. But what I realized is that as amazing as some of these story lines were; the dark undertones and violence were causing me so much stress! Seriously though, stomach would hurt, particularly in violent scenes and I would always have such weird nightmares.

I’m not saying I will never watch a dark drama again, but if I choose to watch an episode of something now while chilling on a rainy day, cleaning the house or especially before bed – I will choose something with a better message. More laughter and a lot lighter. I’m a baby and proud to honour that!

If you feel my pain or have the same cheesy taste I do and love to watch some mindless and girly TV – I’ve put together a list of my top 10 favourite Girly & Binge-Worthy Netflix shows.
(Because I don’t know about you, but when someone puts up a status on Facebook asking for recommendations – I can’t wait to see what people write!)

So here is my list, and I’d love it so much if you leave some of your favourites in the comments below. Happy girly-binging! 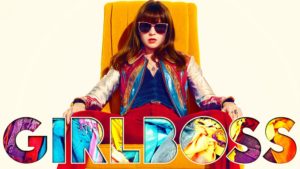 This show is way too cute! For me it really left me feeling uplifted and motivated. This will resonate a lot with my fellow online entrepreneurs. We have all seen the darkest days and the brightest outcomes of sticking it out and this hits home in that way. Plus, it’s based on a true story which makes me love it even more. The actress that plays the main character Sophia (Britt Roberson) is really adorable. I think you’ll like this one a lot! 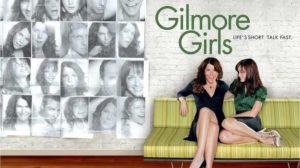 An oldie but a goodie! I never watched this when it was on television. Someone recommended it to me a couple years ago and when I saw it was on Netflix I thoughts I’d give it a whirl.
It’s a light watch featuring a relationship between a single-mother and her daughter. It’s a really witty and the show just makes you fall in love with the characters. They also recently came out with a revival series of the show 10 years later, called ‘A Year in The Life’. It was really well done, too! 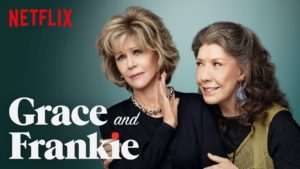 I love this show! Frankie’s character makes me laugh out loud. This is about two women in their 70’s who’s husbands are business partners – and come out as gay and announce they are together very late in life.
The show is based on how the two women get on with life and support each other through it. I know the theme sounds heavy, but they do such a lovely job of making you laugh all the way through. It’s a great comedy and storyline. I love the characters and I know you will, too. This one is great for people who don’t love shows that are ‘too girly’ but like a good laugh!

I’m sure many of you have seen this show, but I couldn’t resist including at least one show from my girl Shona Rhimes (aka creator of everything epic).
Shonda is the most talented writer and show creator. I love her fast paced twists and turns and romance and smart writing.
I truly love everything by Shonda (#FANGIRL) – but Grey’s is the most ‘girly’ with all it’s romance and heartwarming (but sometimes heart-breaking) story lines. Again this is not as light as some of the others, and I think they are on about the 12th season so it’s a big undertaking – but man I love this show.

*This is the only one I don’t watch on Netflix. I PVR it live and watch it whenever I have time to relax during the week. It’s that good! 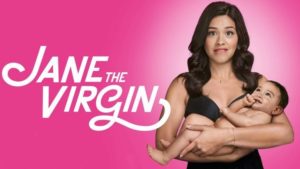 I don’t think I knew what a Telenovela was until I watched this show. But I’m obsessed!
The marketing of this show made me unsure when it first came out. But now that I’ve watched it, I can honestly say it’s one of my favourites on this list. This is the ultimate girly watch!
The premise is that Jane (a virgin) goes for a routine pap and the doctor is an alcoholic and mixes up clients. She accidentally inseminates Jane and Jane becomes pregnant. I know it sounds insane (it is!) but it’s such a good show. Fast paced, with lots of twists and turns and so much romance! 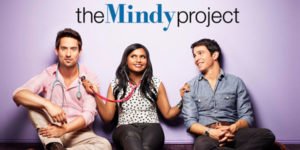 Mindy Kaling (star actress of this show) is my spirit animal. She truly gives zero f*cks and her character is such a true depiction of what life would be like if we were all just a little more honest. It’s also really body positive and most importantly – hilarious! Romance, dating chronicles, women in a man’s world, this show has all of it. It’s truly laugh-out-loud funny. I highly recommend. 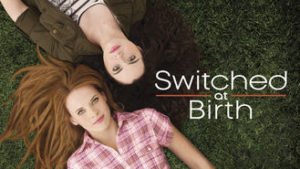 Okay this might be a little dorky for some! Ha.
The premise is two teenaged girls who find out through a high school science project that the hospital accidentally switched them at birth. It’s a really light watch, but I also think they handle heavy topics in a really eloquent way on this show.
One of the daughters who was switched is deaf. This show made me want to learn ASL and I now have such a different appreciation for the deaf community. I really liked it. I do think you need to be into the ‘Gilmore Girls’ type of shows to appreciate it. 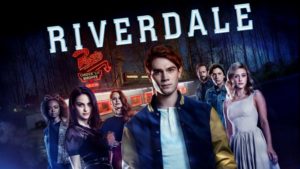 So this one is a little less girly. Anthony and I watched it together.
People seem to be turned off of giving it a chance because the characters are all a ‘revival’ of the Archie comics. I think this leaves people feeling confused of what the show is really about.
But I’m here to tell you it’s like Gossip-Girl meets Pretty Little Liars with a touch of The Killing. It’s a teen drama, murder mystery and it’s really great! Anthony and his best friend James love it so much. So it’s a good one to watch with people who aren’t as into super cheesy girl TV, but love a good story line. 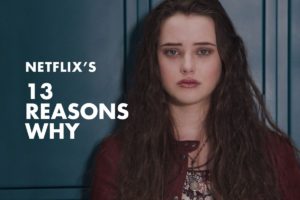 I was hesitant to put this one on here. This show has got a lot of controversy and I 100% understand why. It’s also not ‘girly’ at all.
But I know so many girls that will love and appreciate it – so it’s on the list.
While the premise of the show is a little unrealistic (A girl commits suicide and leaves behind 13 recorded cassette tapes as to why) – it tackles some really, really important messaging.
A website I write for I AM THAT GIRL consulted on the show and they did such a great job weaving in real and hard conversations about what bullying is really like in high school.
They show that today bullying is not the typical stereotype of ‘being stuffed in a locker’ – but that it’s actually way more serious, and way more easily ignored.
It clearly highlights important issues like cyber-bullying, rumours being the truest form of bullying, sexual harassment, double standards and the sexual shaming that happens to women and not to men.
Personally I thought it was really well done. And while suicide is never the answer, I do hope it can show teachers, parents and educators what to actually look for when a student is going through a tough time – and most importantly not feed into it because of societal expectations.
It also keeps you on the edge of your seat. It’s really well done and while this is not a light watch (at all!) – I think it’s important. Just remember to breathe and maybe don’t watch right before bed!

The last show is super ‘kookie’, silly and ridiculous but I love it for that. I’m behind on the recent seasons – but it really is a great show for a quick giggle. The episodes are short and the storyline is cute. This one is the true definition of a light show that gives a good laugh. It’s worth a watch if you can take the silliness!

I’d love to hear your favourites in the comments below.
Let me know your Girl & Binge-Worthy favs!